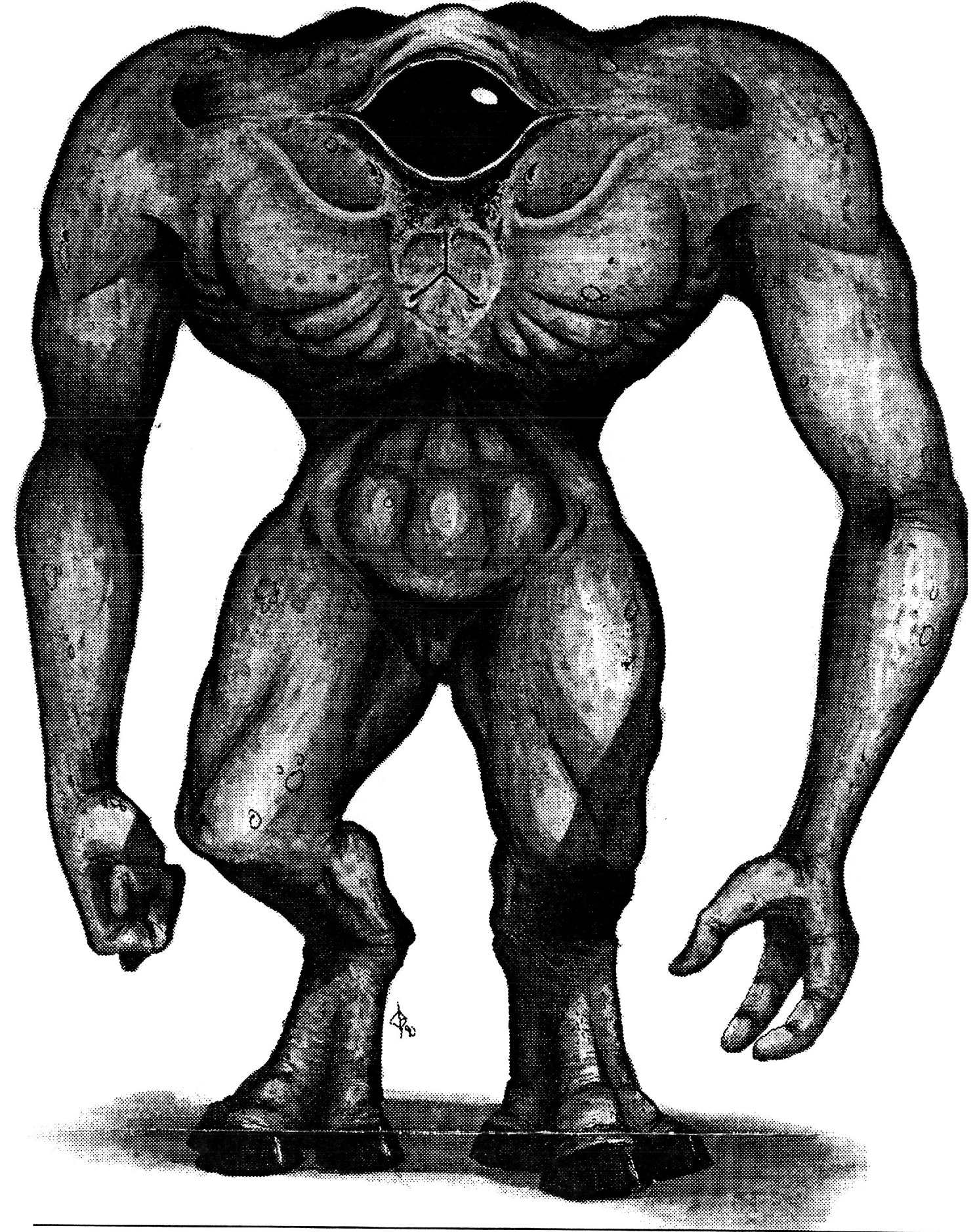 Most of the Kranes sensory organs are located in the mass above the legs. At first glimpse the second thing beside their size you see is the large eye sometimes 30cm in diameter. This organ takes up most of the interior space in the upper torso. The drawback to having single vision is range finding but this is only a problem at long ranges. One good thing about this type of eye is due to the size of the iris it has incredible night vision capabilities. One unfortunate thing about the Krane is that they have low color vision but it is this that contributes to the night vision . The mouth is unique because of the three prehensile lips which are able to whistle beautiful melodies. Inside the mouth is a smaller mouth with two flat incisor like teeth and two molars. Just 2 cm behind the molars are the taste buds. The Krane have a good sense of taste except they can't taste sour things. Their sense of smell isn't that effective but they can smell sugar. The odd thing about the Krane is they can smell but they can't distinguish between odors and their two nose holes operate independently of each other. In a situation a Krane could locate his opponent by knowing which nose hole is receiving a stronger odor. On the top of the Krane is a single ear with directional muscles. It works by sound waves moving small hard membranes and bones to reproduce the sounds, and this method is very effective. This This ear can hear sound very low on the scale, but has difficulty on higher wave frequency like the wine of a turbo fan. All over the Krane body are touch receptors which feel hot, cold, pressure, but in varied degrees due to the thick jet black leathery skin. The black color of the skin attracts heat and this adaptation can tell them the location of a hot heat source. Neurologically the Krane have no psychic power or ability to receive psychic stimulus, but this drawback has a good side; even the powerful soo coli cannot read a Krane's thoughts for some unexplained reason. 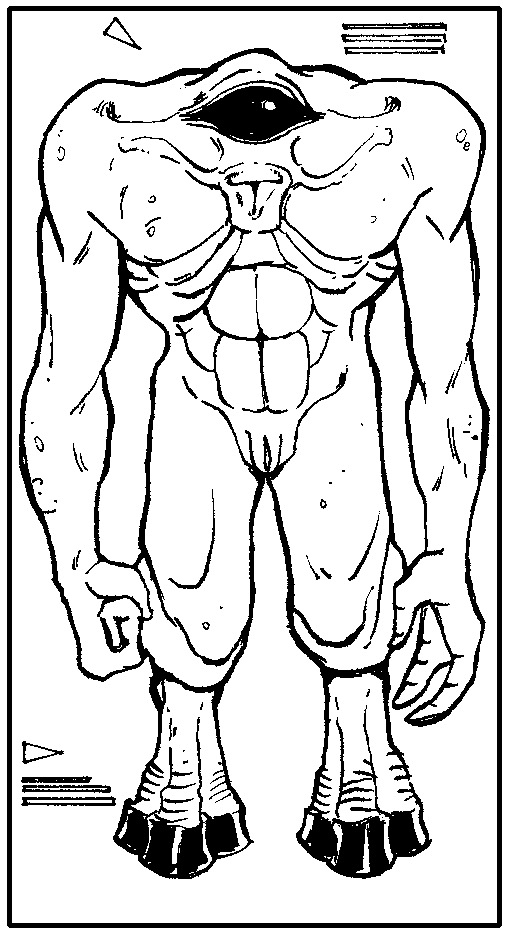 The Krane have only toe dialects at this time the Mondue and Trinoma. In the past they have had several dialects but over centuries they have brought the number down to two. They both sound the same but end end with different suffixes or begin with different prefixes or veg different roots but to a bystander listening in to a conversation between a mon and a tron wouldn't be able to tell them apart. The voice box of a Krane has less cords than a Terrain or a Mahendoshi so their voices are deep and strong. This trait limits the amount of languages the krane can speak. They can't even speak the Aracnian or the Mahendoshi. A Krane holding a steady conversation with an Eebek in not possible unless there is a translator present. The Krane has a considerable difficulty talking to other races , because when they talk the use almost no body language.

The Krane lifestyle is that of a Hyperactive child as in a Krane only needs 3 hours of sleep on average and seem to always be fidgety and active in the daily life. Rarely do you see a Krane sitting for hours on end. A krane family or brude consists of a male and a single offspring. The female bares young life after carrying the baby for 15.5 months. The baby can survive right after birth. The father brings up the young and the mother disappears after birth. A child Krane take 11 years (S.E.Y.) to grow into an adult and 15 years before it can reproduce. Mating rituals are varied , The most common form, is males and females in large groups in sods, similar to bars. Both male and female have a strong desire to reproduce. As religion goes the Krane don't believe in a god or gods and have no real loyalties to family or friends. They have no sense of love or loss when an offspring dies but they are extremely possessive as a large group as a large group with material things. As an Individual they are free enterprising. A Krane community contains about 300 to 1000 individuals and many stores, sods, similar recreational facilities , med centers, government centers and a large number of brides. Several communities make up a klesh. several classes make up a city and several cities make up a country or cosh. On Krane now there are two coshes. The Mondue and the tronmoa. Both he mondue and the tron are very military equipped and are war orientated. At the borders. Both the Tromoa and the mondue want what the other has and this has caused more and bloodier wars. But due to their possessive nature they have a knack for inventing effective weapons. This isn't' to say the Krane war , they don't, but due to their possessive nature they passionately and painfully defend their borders and territories. Each cosh has a huge army on average 1,750,000 Krane in each army and their weapons technology has been developed to gargantuan proportions. Their ground forces are massive, but their space navy is young and growing. As a whole either the Modue or the Tromoa to an outside observer are deadly enemies. And It is the reason why the Krane are still under consideration by the P.S.F. The largest war ever fought on Krane was the Droode which ended 23 years (S.E.Y.) before it first discovery by and Eebek exploration vessel. This war took the lives of six million krane and lasted 11 years (S.E.Y.). When wars start on Krane they are fast passed and costly . AN interesting thing about the Krane military technology is they have nuclear power but would never use it against their enemy because the whole idea about a Krane war is to gain possession of what the other Cosh has. The loser wouldn't use nuclear power to get it back because they would want it to be in relatively the same shape as they left it. Both coshes have been around for 261 years (S.E.Y.) , before the Tronmoa and Mondue there were up to 30 coshes and multiple leaders. The reason for the extended period of peace originally is the Droode war wasn't going anywhere but now due to the discovery of other races they are as a whole a bit paranoid. The Krane relation to the P.S.F. is bias toward joining but they would like to solve their problems first. Many Individual Krane are part of the P.S.F. and venture back and forth. The economic condition of Krane is average with 11% unemployment. The largest cities on Krane are the Gouwin at a population of 11.2 million and Earn with a population of 12.6 million both are in the Momdue Cosh. The planets' entire population is 7 billion with 3.7 billion in the Mondue Cosh and 3.3 Billion in the Tronmoa . Krane was discovered by the Eebek in 2239 but were practically ignored by the inhabitants due to the fact that the Krane can't communicate with the Eebek. The most productive meeting between the Krane as a whole have no qualms against any individual races.

NOTES: The Krane blood has chemicals in that are sought by the medical society due to its' ability to congeal fast and kill certain viruses. A drawback to the Krane size is they can use krane manufactured goods or Krane adapted shelters or vehicles. The Krance only need to eat every 48 hours (S.E.H.) and drink ever 12 hours. Binocular vision is impossible for the Krane, but their compensates for depth. The Krane live up to 120 years (S.E.Y.).