In the inky blackness of the fierce downpour a figure bundled up against the elements hurried along the stony path leading to a squat dwelling. The walls of the house, were glass and at this hour translucent, signalled the light and warmth inside. As he approached the main door, large wooden and ornately carved, the house detected the presence. A moment before he would have had to slow his pace to avoid a collision with the front door, it's significant mass swung open silently.

The house guided him to the bedroom, steps away from the door to the master he head a woman cry out.

The doctor rounded the corner as said. "Another contraction? Good, they are getting more frequent"

"And more intense" Saraha replied. Sweat beaded along her brow, and her smile warm but strained.

"Thank you for coming at such a late er ... I mean, so early this morning" The tall, muscular man supporting the woman's while looking at his own watch.

The doctor nodded almost imperceptibly, "I am the village doctor ... house calls are part of the service. Name's Dr. Proda, please call me Jelan. And, you are Peter Pendleton and this is of course your wife Saraha." The doctor continued.

He placed his bag on a side table, retrieved a device from it and approached her all-in-one quick fluid motion. He continued talking.

"I have monitored your wife's bio-stats since your arrival announcement at last week's tele-town-hall. I see you've been settling in well."

"Yes," said Peter. "The move to Earth went well and I've had lots of time to un-pack"

The contractions have intessified and she has progressed into labour. The consensus between the biomed-Algo of the house's core and the diagnostic AI. A message flashed on Jelan's tablet.

The house recommended a mild tranquilizer to ease the pain of it's owner. Jelan reviewed the data, agreed, and flicked away the message in acknowledgement.

He reached into his small bag and produced a small circular item. The backing, easily removed, exposed an adhesive patch. He applied it to Saraha's left wrist. The trans-derminals got to work immediately. The pain subsided, her breathing becomes more regular.

"Just part of the service", Jelan's single eye blinked once, then once again. Eebek's eye blinks are like humans shoulder shrugs.

"Human live birth is such an amazing process, I'm facinated with it since I learned about it at the acedemy. So much more invasive than the eggs the Eebek's lay, and protect."

"Now, take it easy for the next couple days Saraha. I know you eager to return to work, but you must give yourself time to recover."

Jelan swiveled his eye stalk between Peter and Saraha. "No more than 50% of your work load. 2 hours per day tops! Agreed?!", his eye binked repeatedly.

Sarah started to protest "but they need ..."

The large eye raised up on it stalk and moved toward Saraha. The effect looked like a cobra ready to strike!

".. all right, all right! Doctors' orders", she relented like and admonished child. 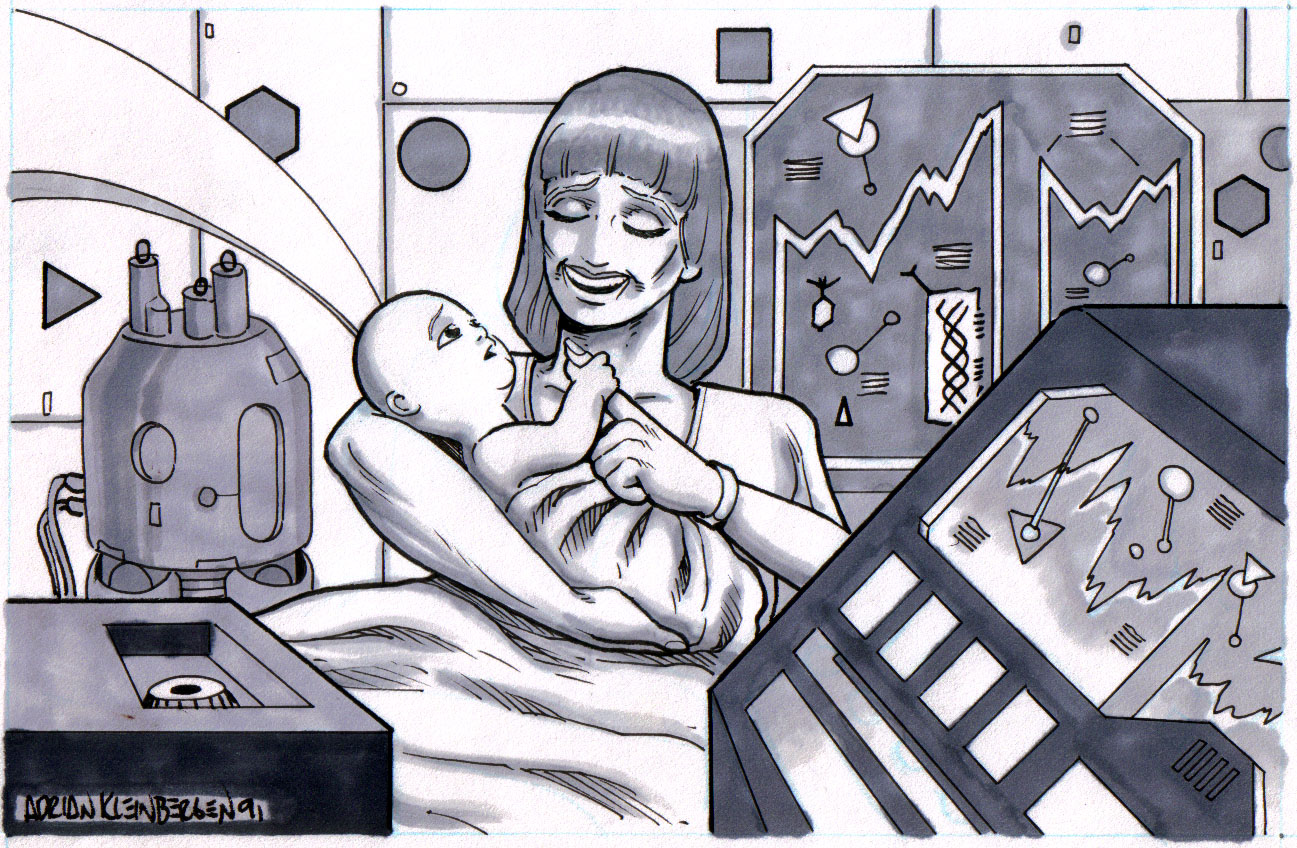