The of the modern era can be traced back to the beginning of the twentieth century, and the power structure that emerged after World War I. The last few hundred had sown the seeds of global thinking and democratic ideals across the western world, resulting in colonial empires and a redefining of the state in terms of its people. This overextension abroad and "undermining" at home weakened monarchies in general. The devastation and overall collapse brought about by the first world war shattered the old order completely, however. The next century was a transitional time spent trying to find a replacement to the system of stability which had served for so long. No other period has been marked by so much conflict. After the war, a wide variety of diverse political and economic ideologies were experimented with; Soviet communism, German and Italian fascism, and even the first suggestions of a global democratic League of Nations. Old habits die hard, however, and in the tradition of the old monarchs, the 1930s saw the rise of strong, charismatic leaders in every major state. The tensions already present from economic depression due to war recovery and the stock market crash of 1929, were inflamed by these leader's own vibrant personalities and goals. Soon enough WWII erupted.
This one left Europe even more devastated than the first, but it also created the world's first superpowers, the United States and the Soviet Union. They were the only allies that actually benefited in the long run from the war. The war also discredited, at least subconsciously, the merits of the strong leader system once and for all. America emerged as the most powerful nation on the planet and virtually recreated the economies of western Europe and the Pacific. In the next decades the world adopted a complex alliance-bloc structure centering around the increasingly adversarial superpowers, and lapsed into a standoff of pseudo stability. For fifty years capitalist America and their "natural" enemy communist Russia sparred off through third world nations, the arms race, technological achievements, and the propaganda and rhetoric of the Cold War. The threat of nuclear annihilation always loomed on the horizon, but this time of tense "peace" gave many nations of the world a chance to recoup. Finally, the superpower's war economies exhausted themselves, and tensions were broken in the interest of fiscal survival. The rest of the globe, however, had grown further than a bilateral system would allow, and the former superpowers receded into the limelight. Later they would have to try hard just to keep up with the new powerhouses in Europe and the Asian Pacific. The emerging order was an extremely intricate one. The nations of the world were increasingly tied together through internationally connected organizations, free trade blocs, multinational corporations, agreements and understandings, but above all by the coming of age of telecommunications. The result was that for the first time a true sense of global consciousness and culture emerged. The world no longer moved because of the will of a few, but by the mass will of millions. A change possibly due to the surge of global democracy, the power of the consumer, or the sheer interdependence of the whole system in general. This period was also marked by more conflict short of total war than any other period in history. Incidents (some nuclear) included; the Chinese Civil War, two Arab-Israeli wars, the India- Pakistan War, the east African conflicts, ethnic violence in eastern Europe and central Asia, the unprecedented use of terrorism, along with numerous revolutions, coup d'etats and uprisings. Although this was all enhanced by a wave of pent up nationalism, most people's horizons had been expanded to the point where they thought themselves citizens of the globe. Ultimately, this mood in the developed nations lead to the formation of the first "superstate" in 2017.

The European Confederation is considered a landmark in political evolution, yet it did not come about overnight. There were over sixty years of solid negotiation and an entire millenium of history that lead up to it, step by step and not always with that particular goal in mind. It's success, however, provided a role model for other areas of the world. Most notably the reform of the United Nations through the 2020s, and for the Southeast Asian nations, who were already enjoying prosperity from economic and trade union earlier in the decade. Europe's Asian counterpart differed in several ways though. Through intense lobbying and use of the unique and respected positions which they held within their societies, huge Japanese, Korean, and China based conglomerates managed to guarantee corporate representation within the new legislature. Most of the past decades in these countries had largely been built around the new "samurai," and now they had grown so powerful, the transition to representing their markets appeared natural. The Europeans were wary of the idea, however, considering most of their dealings had been with American styled businesses. In 2025 the Middle East entered into its bloodiest and it's final war. Considering the region's history, the rest of the world grew tense. This was amplified by their dependance on Mid Eastern oil and gas at a time of dwindling reserves. As oilfield after oilfield was destroyed and incidents between interest factions and escorted tankers increased, UN peacekeeping troops were brought in. This served only to aggravate matters, being condemned by all sides. Finally, a week after an unfortunate UN incident on the Red Sea, a Saudi backed extremist group detonated a 6 kiloton nuclear device at the UN headquarters in New York. The blast killed thousands and leveled part of Manhattan. In response, the US, the European Community, and other nations including China and India, quickly mobilized against a threat perceived as increasingly unpredictable. Within three months they had forced an end to hostilities, but at a dreadful cost in lives; there had been liberal use of chemical and viral weapons, and 137 nuclear detonations. In all the conflict killed 16 million, and has come to be known as WWIII, or the Energy War. During the 2040s, the environment again became a concern in a way it hadn't since the end of the last century. Problems had begun to be recognized as early as the 1970s, unfortunately though it took decades for the political and economic will to appear and the results were beginning to take their toll. Acid rain formed in areas of the third world that burned the skin on contact. Modest rises in global sea levels due to melting from polar ice. Extreme and unseasonal weather, and rampant waste disposal problems. In some city's downtown cores health officials advised the use of oxygen masks. Probably most devastating though was the depleted ozone layer. Not only did it mean you couldn't go out into the sun unprotected, but it spelled disaster for many types of vegetation. The record number of crop failures through the 2040s and the hunger and starvation which resulted, occurred not only in the third world, but in the developed nation as well. Throughout the first half of the 21st century, various nations made all manner of technological and scientific advance, but the ones most relevant to modern life have to due with space exploration. Mankind's first visit to Mars was a joint expedition by all major space faring nations and occured in 2019. The team made many stunning discoveries and set up a temporary base which was used by other crews until a permanent colony could be constructed a decade later. Other space projects included the Asian-Third World solar power satellite program, the EuroAmerican lunar colonies and mining effort, the development of inexpensive chemical lift, and later on fusion rockets, and dozens of other probes and platforms by all nations. This all helped to secure mankind a permanent presence offworld, but above and beyond all other space achievements was the discovery in 2068 of extraterrestrial intelligence.

The fall of corporate Earth was swift, but it's crash sounded for years. In the anarchy which followed, there was a mass exodus offworld that took tens of millions beyond the confines of the Solar system. The interim structure setup on Earth, meanwhile, received aid and financing from the Eebek. In 2186 they established the Poly Solar Foundation to stabilize humanity and give it a base from which it could regrow (later on this organization would come to represent the juncture of the Eebek-Human Alliance). Recognizing the limitations and shortcomings of representational democracy, the government which developed in the coming years evolved from the limited direct democracies which existed on a civic/regional level for the most of Earth's cities. By utilizing technology developed during the previous corporate era, city computers were upgraded and interconnected through regional and supranational networks. The computers reflected the goals and need of their populations, yet allowed individual people to make a major political and legislative decisions. This effectively recreated Pericles' Greece on a global scale, and finally buried the idea of the nation or supranational state. While presidents and prime ministers were now obsolete, citizens were still chosen to represent their city as figureheads. With no legal power, and only slight material benefits, these new mayors embodied the spirit that the populace felt their city should be represented by. They attracted business and sporting events, encouraged tourism and the like, yet held no set term; they were simply recalled when it was felt they were not up to snuff. These type of representatives were also selected for regional and global levels of interaction. The formal introduction of humanity to the other intelligent races within it's space, and the amazing discovery in 2212 of the vast so called "Second Sphere," led into a new age of cooperation and prosperity. The dismantling and regulation of large corporations after the fall spurred an explosion in small business entrepreneurship which continues to this day. The modern state of affairs is one told throughout history; one of conflict. Although nations no longer play the chess game of power, Earth's colonies do, and sponsored by Terran governments and corporations, they compete for territory, trade, technology, immigrants. However, with hundreds of colonies that vary as wildly as dictatorships, theocracies, corporates and monarchies, their exchanges can get quite colourful and sometimes violent. These many differences have spurred the growth of large interstellar organized crime rings, smugglers and pirate factions within the last decade. Additionally, there is the threat of the Thro, a vicious race encountered a few years ago against which all inhabited worlds are mobilizing. Although currently contained to three star systems, it's anyone's guess as to where the'll appear next. And finally there in the immense unexplored unknown of the Second Sphere. Remnants of an ancient and dissociated stellar empire, the second sphere offer information, races and technology beyond man's wildest dreams. Yet even though he's the new kid on the block, he's got a few things they don't, to bargain with.

This is truly the beginning. 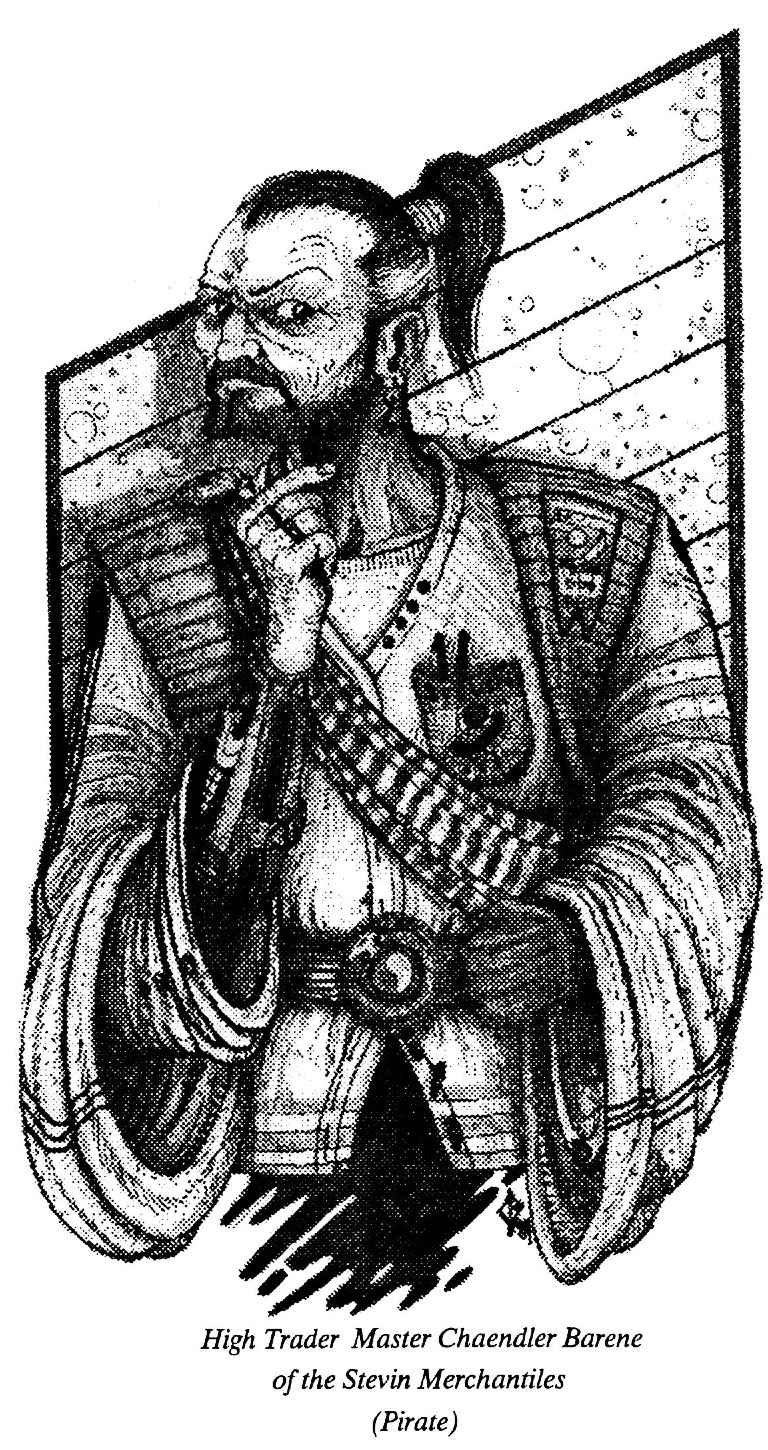